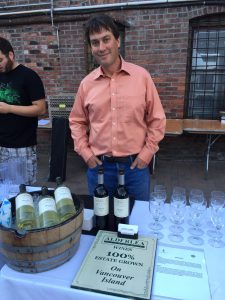 At the end of August, Zac and I had a chance to join downtown Victoria restaurants and for the third annual Get FED Summer Party in the Fort Common in downtown Victoria.  FED‘s mission is to create a district in downtown Victoria that is a destination for sustainable food, full of amazing eateries and a growing number of edible gardens.  Alderlea Vineyards’ 2016 Bacchus and our newly released 2015 Merlot were served alongside beers from Hoyne Brewing Company.  FED members Very Good Butchers, Chorizo & Co, Foo Asian Street Food, Habit Coffee, Olive the Senses, Pizzeria Prima Strada and Yalla were serving up tasty bites to accompany our wines and Heidi and her team did an outstanding job, raising nearly $2000 to support urban agriculture projects in downtown Victoria.  We look forward to further collaboration with FED members.