So we’re big composters and have been since our time living in Vancouver.  When we moved to the vineyard, we were delighted to see the large pile of pomace from the leftover grape skins after each year’s harvest and winemaking processes. Our soil has historically been quite nutrient rich, given that the trees that formerly occupied the land were careful removed by the roots, leaving the soil profile intact.

Over 20 years on, it is time to put a little something back into the soil, gently mind you, as we don’t want the vines to get over fertilised and put all of their energy into the vegetation and not the grapes.  Enter the pomace or what has now become known as the accidental garden.

When we came over from Vancouver, we brought our composting bin and proceeded to populate the pomace pile with worms and material from the bin.  Low and behold, a few months later, we have a large, unplanned compost garden of zucchini, tomatoes and bell peppers, all originating from our household waste. 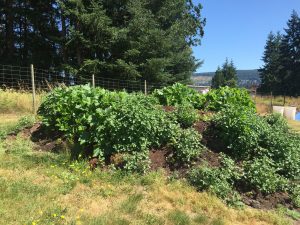 Everything in the pile seems to be thriving.  In fact, the sorry looking Roma tomatoes in our greenhouse may soon be relocated to the compost pile as given how well it’s doing.

Most importantly, on the vines we find these little guys: 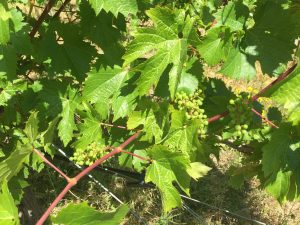 With the warmer temperatures, they are starting to gain momentum.  We’ll be tending the vines carefully in the weeks to come to ensure they get enough sun and avoid overcrowding.