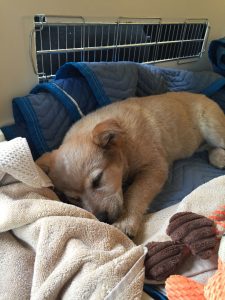 I would like to introduce the newest family member of Alderlea Vineyards, our red heeler puppy Vino.

While we have only had her a few short weeks, she has already captured our hearts and is basically calling the shots now.  Having no children, this is likely the closest I’ll ever get to having a child and I can now begin to empathise to some extent with new parents.

I worry that she is getting enough attention, has enough to eat and drink and is getting enough stimulation and discipline.  I feel guilty about not spending more time with her when I’m in the office though Zac has been able to bring her along on deliveries and have her with him as he repairs equipment and putters about the vineyard. 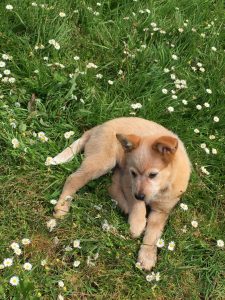 A true vineyard working dog, she doesn’t balk at the tractor and contentedly runs alongside in the neighbouring row when Zac is driving.

She just wants to be near us and in the first weeks has tried to defend us from the neighbouring horses and cows even though they are already behind fences.

Happily, she is starting to find some independence, give in to natural instincts and chase the invading rabbits who threaten our flourishing vines.  Her prey drive was one of the features that attracted us to her breed and we hope to cultivate it so that she chases off other vine predators. 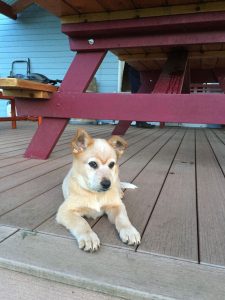 So far, she is winning the hearts of most people she meets, scurrying over to each new visitor and promptly rolling onto her back for a belly-rub.  Shameless.