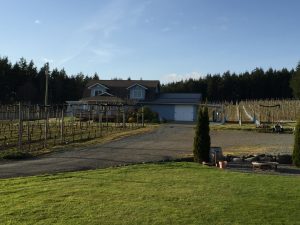 So I guess it is no longer a dream.  Zac and I are now officially winegrowers.

After more than a decade of discussion and winemaking in the garage (Montreal) and driveway (Vancouver), we are getting serious, farming 7.5 acres of white and red varietals in the Cowichan Valley on Vancouver Island.

As ever, Zac is the inspiration behind this ambitious endeavour.  His winemaking has grown increasingly impressive as the years have passed.  I am far less educated about the winemaking process, having been more involved in the catering (feeding the troops) and janitorial aspects of the process to date.  That said, I have done my share of “punching down grapes”, bottling and sampling the barrels over the years.

Neither of us has ever grown grapes, though Zac has worked on vineyards in Europe and Australia, and he has certainly researched and reflected on it a great deal.

Running our own business will be new as well, though we’ve both worked in corporations large and small for 20 years.

We have the passion, the energy and probably most importantly, the sense of humour to be doing this.

As a lifelong friend said to me when we first embarked on this, “if you guys can’t do this successfully, I don’t know who can.”

Thanks Ken.  We’ll certainly do our best. 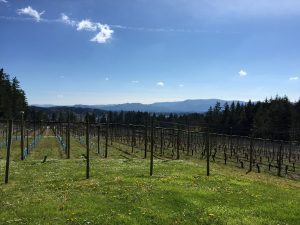